Gravel – Getting on the good stuff for under £300

The term Gravel or Gravel riding is gaining some serious momentum in the biking scene.

Especially post-Covid, more and more riders are heading into the countryside to take advantage of traffic free off-road riding, as a result it seems the bike building industry is struggling to keep up.

As advancements in bike building and tech has developed so has the amount of riders converting to Gravel riding – It’s almost that mellow happy medium between road and mountain and people cant get enough of it.

A gravel bike is essentially a bike frame built inspired by the geometry of a road bike combined with the durability, components and wheel options of a cross country/MTB bike. Bike builders are putting frames together with wider drop outs, disc brake mounts and all the right clearances to accommodate a wider tyre and more gears to get up those bumpy climbs. 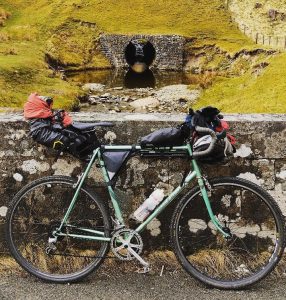 rs. In fact gravel riding has been about since the dawn of bikes, some would argue it came first! And that its only as bike tech improved into the 20th century that riders sought to push boundaries on steeper more technical terrain on the mountain or quicker/lighter bikes to break records on the road.

So has the biking industry gone full circle?

It would seem now that riders are combining the two, there are tales of keen cross country cyclists, road riders and mountain bikers selling up their fleet of bikes to instead buy ‘One bike that does all’. But at what cost?

A mid range gravel bike with a robust frame, hydraulic disc brakes with a cross country group set might set you back £1500. That’s if you’re lucky enough to find one in stock. I didn’t fancy selling my mountain or road bikes to fund this hunt for a gravel bike so inspired by the RSF – Rough Stuff Fellowship, I tried something rather unusual.

Before I get nerdy about bike building and vintage bikes I just want say a few words about the Rough Stuff Fellowship.

The RSF is a national riding organisation with a rich and interesting history. Founded in 1955 its early members were made up of keen cyclists pushing the boundaries of exploration and what the bikes of the time were capable of. We have all seen the old bikes, the parallel steel frames, flashy chrome rims, down tube shifters – What you might see at the car boot sale and refer to as a ‘vintage bike’. However these riders were tinkering and adjusting these bikes to take them to places they were never designed to be. The real pioneers at the forefront of what we now refer to as Gravel touring & Bikepacking. Check out the Rough Stuff Archives to see some incredible classic pictures of these riders in some gnarly terrain.

So how did I get my hands on a ‘Gravel Bike’?

Inspired by the RSF I set out to buy myself a vintage steel road bike and do a gravel bike conversion.

I started researching vintage bikes by trying to identify the bikes in some of the old pictures. There are hundreds, along with a sea of vintage groupsets like Suntour, Shimano and Campagnolo. Something that kept re-occurring were the words ‘Reynolds 531’. Which I came to learn was one of the best lightweight steel frames of the era. A short session researching vintage group sets I came to learn that the Shimano 600 Arabesque series seemed to be the popular mid range set in its time, it is also a work of art. So I basically hit the internet looking for a vintage bike that had the Reynolds 531 stamp and a nice looking group set. But the frame was the most important thing.

So here are a few things I learnt about a Vintage to Gravel Conversion.

They are generally steel frames, Steel is real and as a material it is hard wearing, robust and will flex and bend before cracking or snapping unlike some of the modern alloy/carbon counterparts.

Steel means most vintage frames can be adapted to take a 700c wheel conversion – which usually means spreading the drop outs by a few mm to take a wider wheel on the rear and give yourself a few more gears. 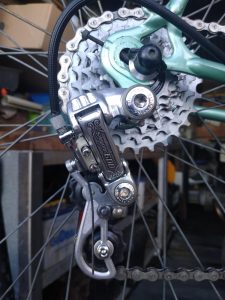 built for. Which means you can slap on bigger all terrain tyres.

Keep it simple – There was a rabbit hole I went down about welding on mounts for disc brake s, I’m glad I did a U-Turn as clincher brakes aren’t actually that bad! They are simple, easy to maintain and will do the job on a budget.

After a not so long search on various online marketplaces I found a nice looking bike advertised as a ‘Carlton – Grand Tour’, belonging to a retired engineer in Spey Bay, East of Inverness.

It was on my route as I was driving from Wales to Scotland, the asking price was £150. After a brief conversion with the owner I could tell it was a well cared for bike with an interesting history. I went to see it.

Charles the owner built the bike in 1982. The following year he put his work into practice riding in an event called ‘The midsummer Madathon’, later known as the ‘Highland Cross’. The frame and all the components were sourced from Thompson Cycles in Inverness.

In his own words ‘I then went through the shop and picked all the best quality fittings that I needed. I chose that frame because it was Reynolds 531 strong but reasonably light steel. That beautiful derailleur set has an opening gate so you can slip the chain out. I selected the frame and all the fittings to be as strong, light and practical as possible. (Probably something to do with me being an engineer!!).’ – I was onto a winner, I loved the story, the history and Charlie’s passion for riding.

I gladly paid the asking price and the following day, with its original tyres and pads, cycled 80 miles on it from Inverness to Gairloch on the West Coast of the Highlands. Despite having sat in a garage for a number of years, the bike rode beautifully. Inspired and keen to develop it to tackle rougher terrain I started drawing up a plan and got tinkering.

I didn’t change too much about the bike, I like its style, colour and all the little stickers it had on it. I did change the old wheels to the modern 700c size, this allowed room for a 38mm tyre up front and a 35mm on the rear. I managed to get a decent second hand Mavic wheel set with plenty of spokes for strength. I swapped the saddle & seat post for a touring saddle and a ‘*cobble gobbler‘. I changed the handlebar stem and upgraded the drop bars to wider touring bars – this gave me the room to use a decent size handlebar bag.

As for the groupset the Shimano 600 Arabesque derailleurs were as Charlie said, ‘Beautiful’, so they were definitely staying. Which meant my gearing was limited. As it was, Carlton had 2 speeds on the front chainring and 6 speeds on the rear cassette, a good range for a bike of its era. These days modern gravel bikes can have 12 speed on the rear and a single or double chain ring on the front! My classic derailleur wasn’t going to allow for that much movement but I did manage to squeeze just enough range out of it to jump into a 7th climbing gear. I changed the cables and linings, other than that the brakes are standard and the downtube shifters still work a dream. 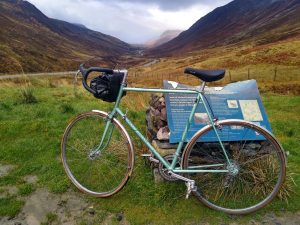 All in the upgrades have not cost me more than £150. For £300 I have managed to buy and adapt the Carlton Grand-Tour and have indeed completed a couple of Grand – Tours on it. Most recently a gravel and B-road route from John O Groats to Land’s End with not a single bike mechanical failure. One puncture is the only issue I had with the bike. It completed 100 miles a day with lots of mixed terrain for 10 days straight. A superbly capable bike.

I am still in touch with Charlie and occasionally send him pictures of his old bike in remote places, boasting about its capabilities on the gravel. I have had so much joy with it and is honestly one of the best bikes I have ever ridden.

So if you are looking to get into mixed terrain/gravel riding on a budget, why not recycle, re-use and see if you can put together your own bike. It’ll have a lot more charm and sentimental value than a box fresh build that’s for sure.

If you have any questions about the build or the journeys please get in touch.

*Cobble Gobbler – A seat post with an in built shock absorber